A family from the United Kingdom has made international news, as a result of an alleged will forgery fueled by a mother-in-law’s disdain for her daughter’s husband. 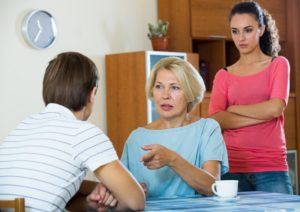 A family from the United Kingdom has made international news, as a result of an alleged will forgery fueled by a mother-in-law’s disdain for her daughter’s husband. Did she intend to disinherit her daughter to avoid the risk of her son-in-law benefiting from her estate?

When Gillian Williams died in May 2017, it’s unlikely that she expected to be at the center of an international spotlight on her family’s life. She left behind a married daughter, Julie Fairs, who is accused, along with her husband Brian, of falsifying a signature on her mother’s last will and testament. The mother’s own sister testified that her sister would never have left her daughter anything, because of how much she disliked her son-in-law, reports Above the Law in the article “What To Do When You Hate Your Son-In-Law: A Practical Lesson in Estate Planning.”

The matter became public when it went to trial. There’s been a lot of nasty family business being shared. Most people avoid going to trial for will contests, since the underlying emotions come out in full view.

Not everyone has friendly family relationships with in-laws. Frequently, the in-law relationship is prickly at best. There is no law that you must like your son-in-law. However, the law presumes that you like your child enough to include her in your estate, regardless of how you feel about her spouse. That means that if there is no surviving spouse, children are permitted to be the “natural object of your bounty.” In other words, these are the individuals who will receive your assets when you die, based on social and public policy and the law.

There are issues in estate planning, when a person wants to exclude a child because of their dislike of the child’s spouse. You may want to exclude a child out of concern that the spouse will mishandle the money or benefit from the money in a divorce. Sometimes parents can’t get past their dismay over a child marrying against their wishes. Disinheritance is not an unusual punishment. However, increased scrutiny is going to be applied to the review of a will, when a child is excluded.

When one child is disinherited, it colors their relationship with their siblings. The beneficiaries and the executor are left to defend the decedent’s decision. That is not easy to do, unless an explanation of why this happened was done beforehand.

There are options to disinheritance, if the child’s spouse is an issue. A beneficiary’s share can be held in a continuing trust, so the spouse does not have access to the funds. The assets can be protected and preserved, in the event of a divorce or just for general money security. It should be recognized that while inheritances are generally protected in divorce, the second the monies are co-mingled, they become joint property. A trust is often the best way to protect an inheritance in this situation.

Another tactic is for the person to skip a generation and instead make a bequest to the grandchildren. The option works best when the funds are not significant, since the parent may be insulted by the decision to leave a bequest to their children and this could pit the child against their own child (the grandchild).

Dividing the estate among the children in unequal shares can be done so as not to completely disinherit a child, but to leave less money. This also holds the potential for creating bad feelings between family members.

The last will and testament is a very permanent document and may not be the right forum to be used to let feelings be expressed or take a stand about an unfavorable life decision by an adult child. The impact of this decision can also have long lasting effects, including lawsuits and family fighting. It is also likely to create a battle between the child and their spouse.

A conversation with our experienced estate planning attorneys, who have seen this situation many times in their practice, should be able to help sort out the best solution. There may be a way to avoid conflict, or at least to make sure everyone is clear from the get-go, as to what is going to happen in the future, and why.

Reference: Above the Law (March 12, 2019) “What To Do When You Hate Your Son-In-Law: A Practical Lesson in Estate Planning”